As Scientists, we do not live in isolation; each of us is part of a society in which we do our Science. At its core, science policy is the two-way commumication between the government and scientists. I believe it is important for Scientists to be aware of and be involved in these conversations. My scientific background and my desire to use that knowledge to impact society together drive my involvment in science policy.

In March 2016, I participated in the American Astronomical Society’s Congressional Visits Day. This was an eye-opening experience for me in two ways: 1) I learned how the federal goverment allocates money to fund astronomical research, and 2) I learned how to advocate for the federal support of Science. I highly recommend American astronomers participate in this important activity through the AAS. 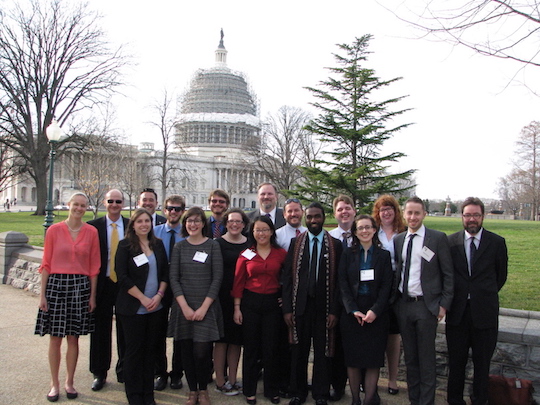 AAS CVD was such an impactful experience that I decided to become more involved in science policy and subsequently I applied for and became a 2018 Christine Mirzayan Science and Technology Policy Fellow at the National Academies of Sciences, Engineering, and Medicine (NASEM) working with both the Board on Physics and Astronomy and the Space Studies Board. During my time at the Academies I created and implemented a 2-day Early Career Focus Session which educated and included early career astronomers and astrophysicists in the planning and input process of the astronomy and astrophysics decadal survey. The focus session brought together 56 pre-tenure faculty, research scientists, postdoctoral scholars, and senior graduate students with 8 former decadal survey committee members, NASEM staff members, and science policy experts. The output of this was a white paper submitted to the decadal survey committee detailing the early career perspective about important topics of the coming decade.

After returning to the University Florida (UF) to finish my PhD in Astronomy, I co-founded a science policy group at UF called Emerging Leaders in Science Policy and Advocacy (ELISPA). Our organization went on to do great things such as host science policy memos writing competitions, advocating at the capital in Tallahassee, and bringing in local and national experts to give talks concerning topics such as science policy and local government.

I participated in a policy memo writing workshop through the National Science Policy Network in late 2018. Several colleagues and I wrote an article in the Journal of Science Policy & Governanc with the gaol goal to provide a resource to the community that provided suggestions on how policy groups could host a similar workshop to train members to write a memo and tips on how to write a memo.